The Artist, by sculptor John Dowie

Born in Holland, first art lessons in Australia, trained in Holland, widely travelled, Gabriël Sterk is a true child of his time who treats the planet as his country. Notwithstanding all this, he remains at heart a European and his Dutchness as it were, is the root stock on which all the other influences have been grafted.

An imaginative artist, he was fortunate in formative years to live in a beautiful Dutch Château Kasteel de Haar near Breukelen. The trees in the park, pollarded and curious in shape provided themes for his fantasy. He saw in them personages, half human, locked by magic in a vegetable condition. This is an influence that has stayed with him and which emerges to this day in many of his compositions. his « Adam and Eve » and the « Wave » and « Cloud » sculptures are examples. An early association with horses at this time was also a fertile source of inspiration. Sterk’s confident familiarity with the forms of horses, developed in childhood, enables him to put together wildly daring compositions with deceptive ease. « The fall of Phaeton » would, I am sure, have won a gasp of astonishment from Bernini himself.

I must say here that with all this virtuosity, Sterk’s art is well disciplined. His identification with the great figurative tradition of European sculpture and a solid training in the craft of his art are the secret of his success where others would lose control.

He is a man of exceptional energy who loves work. He decided early that if he was to have his sculpture cast in bronze, he would have to do much of the work himself and he became that Renaissance thing, a sculptor who is his own founder. This professional knowledge of his final medium runs through all his work which can be seen to have been conceived as bronze from the start.

Gabriël Sterk, who works in France and Australia, is now in middle life with much accomplished behind him and plenty to come. There will be growth and change, though he will probably remain a figurative artist. Whatever happens, his awareness of the balance and interplay of solids and voids which underly all three-dimensional art will always tell the viewer that here is the work of one who thinks like a sculptor. 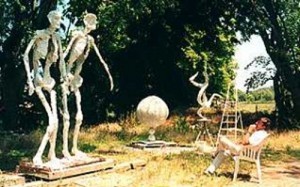 Awarded a first prize for a painted self-portrait in 1959, the same year the young artist attended drawing classes in Adelaide. In December of that same year he decided to return to Europe in order to continue his art education. After a short period in Italy, Gabriël Sterk continued his studies at the Royal Academy for fine Art in Amsterdam, where he studied sculpture between 1960 and 1967.

In 1969, he was awarded the Grand Prix de Rome
for  »Adam and Eve« . The Academie des Beaux-Arts gave him the Louis Weiller medal in 1974 for his portrait de Jeune Fille (acquisition by the sculpture Museum Beelden aan Zee, Holland).

Until 1979, Gabriël Sterk worked mainly in the Netherlands where many of his bronze sculptures can be found on public grounds and in private collections.

In 1979, he returned to Australia to execute some major commissions : The Mare and Foal for Scone N.S.W. and The Gan for Alice Springs.
Equestrian statues for the Rymill winery, Coonawarra.

Documentary on French television on the artist.

In 1993 with « Poulain » he won the « Prix du Public » at the Salon de peinture et de sculpture, Château de Coubertin and a First Prize Sculpture section at the « Salon d’Automne de Saumur » (France).

Settles in Aix-en-Provence in a south of France where he displays his major works in his garden, situated close to the center of town.